What If They Become President?

In case you want to save time and not click the links, I'll make it easy for you:

Don’t believe me?  Consider the following: 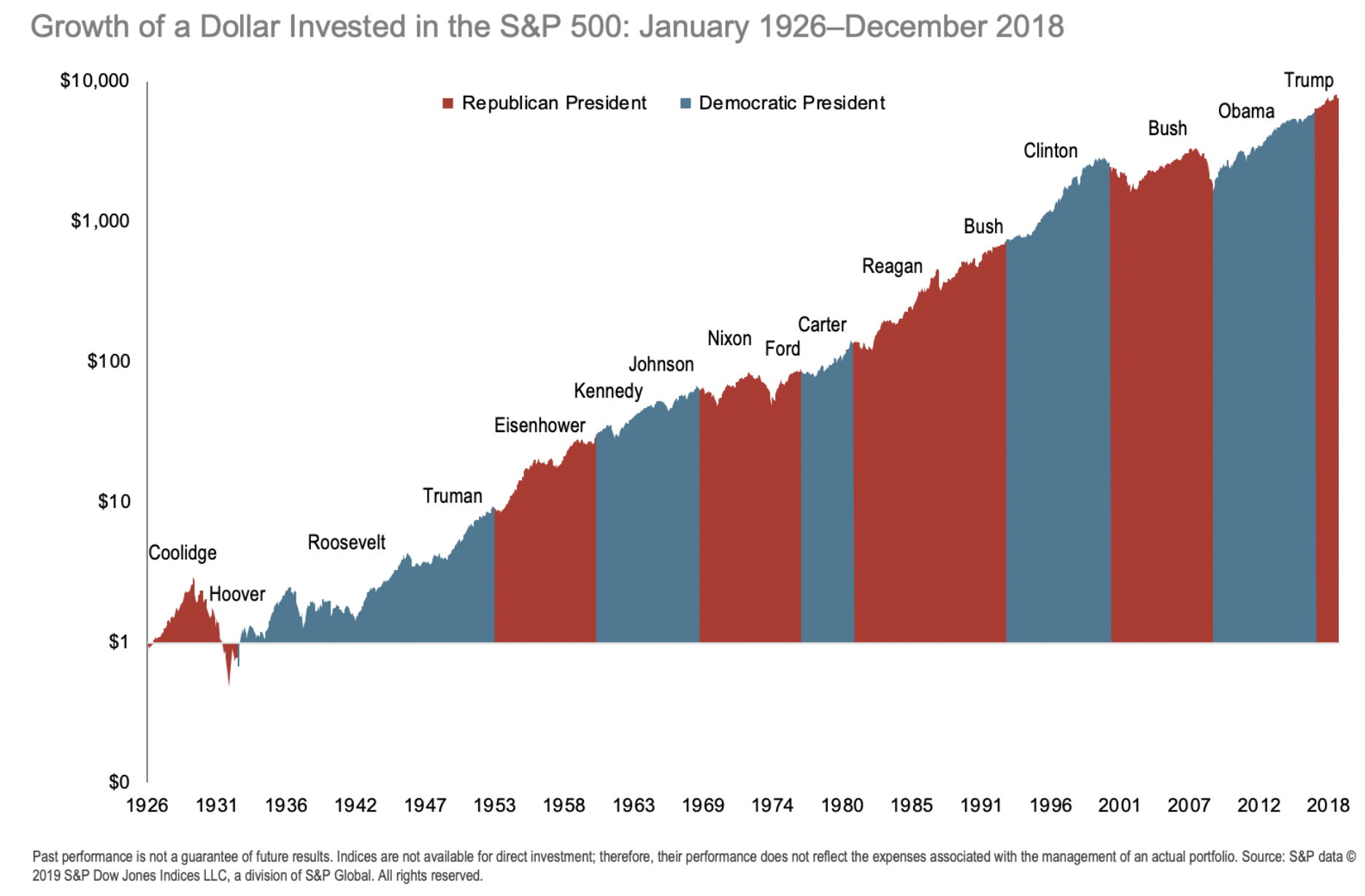 I should stop here but I won’t.

That chart goes back to 1926 and includes Democrats and Republicans, moderates and firebrands, Presidents accused of being Socialists, and Presidents who were impeached, assassinated, governed during times of war, and governed during times of peace.  All along the way the trend in the markets continued up and to the right because the markets don’t much care who the President is.

Still not convinced that your portfolio doesn’t care who the Commander in Chief is?  Here are a few more points that will help convince you:

I know you’re sick of hearing this from me but it’s true.  You can’t time the market nor make sense of it most of the time (read: all of the time).  Think of the following scenario:

A President is elected in a major upset victory that even many of his own supporters didn’t see coming.  Markets immediately fall 3% on the night of the election.

This President promises to upend traditional monetary and fiscal policy, terminate every major trade agreement that the U.S. is involved in, and implement 25% tariffs on our largest trading partner.  Oh, did I mention he possibly gets impeached halfway through his first term?

Is that an environment in which you’re itching to invest money?  Probably not…and yet all of that came to pass in the last three years and the S&P 500 has still shown a compounded annual return of over 15% since then…

You just can’t predict it.

Every new President comes to Washington, D.C. with a bold new agenda of how they plan to reshape the country…and then reality sets in.  We have a pretty good system of checks and balances that keeps excesses on both sides of the aisle from actually becoming policy.

Remember when Obama was elected and the gun lobby went berserk thinking he was going to take everyone’s guns away?  Here’s what gun sales did during Obama’s presidency: 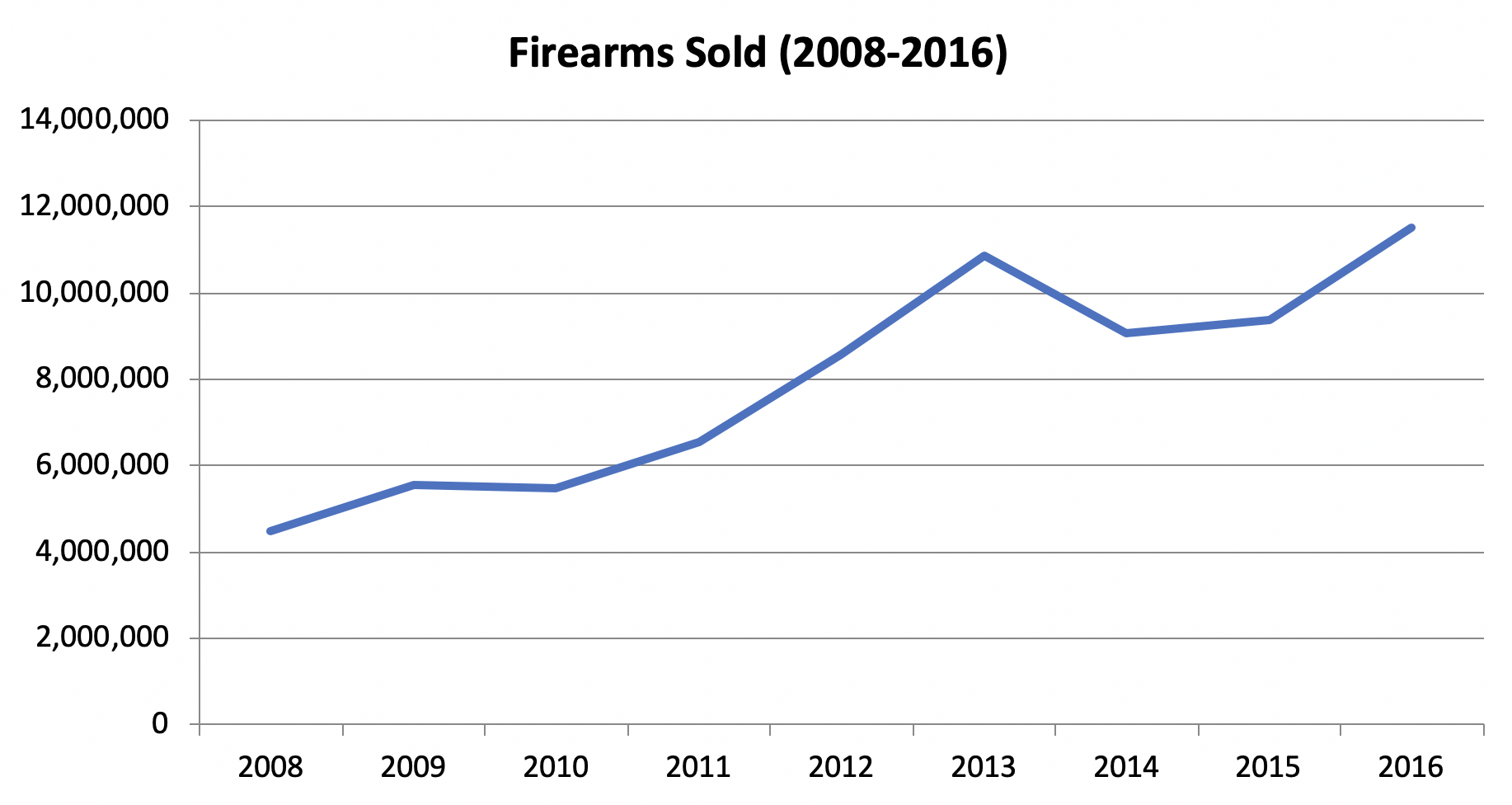 And had you been so bold as to buy the stock of the largest gun company on the day Obama took office?  Here’s how that trade worked out: 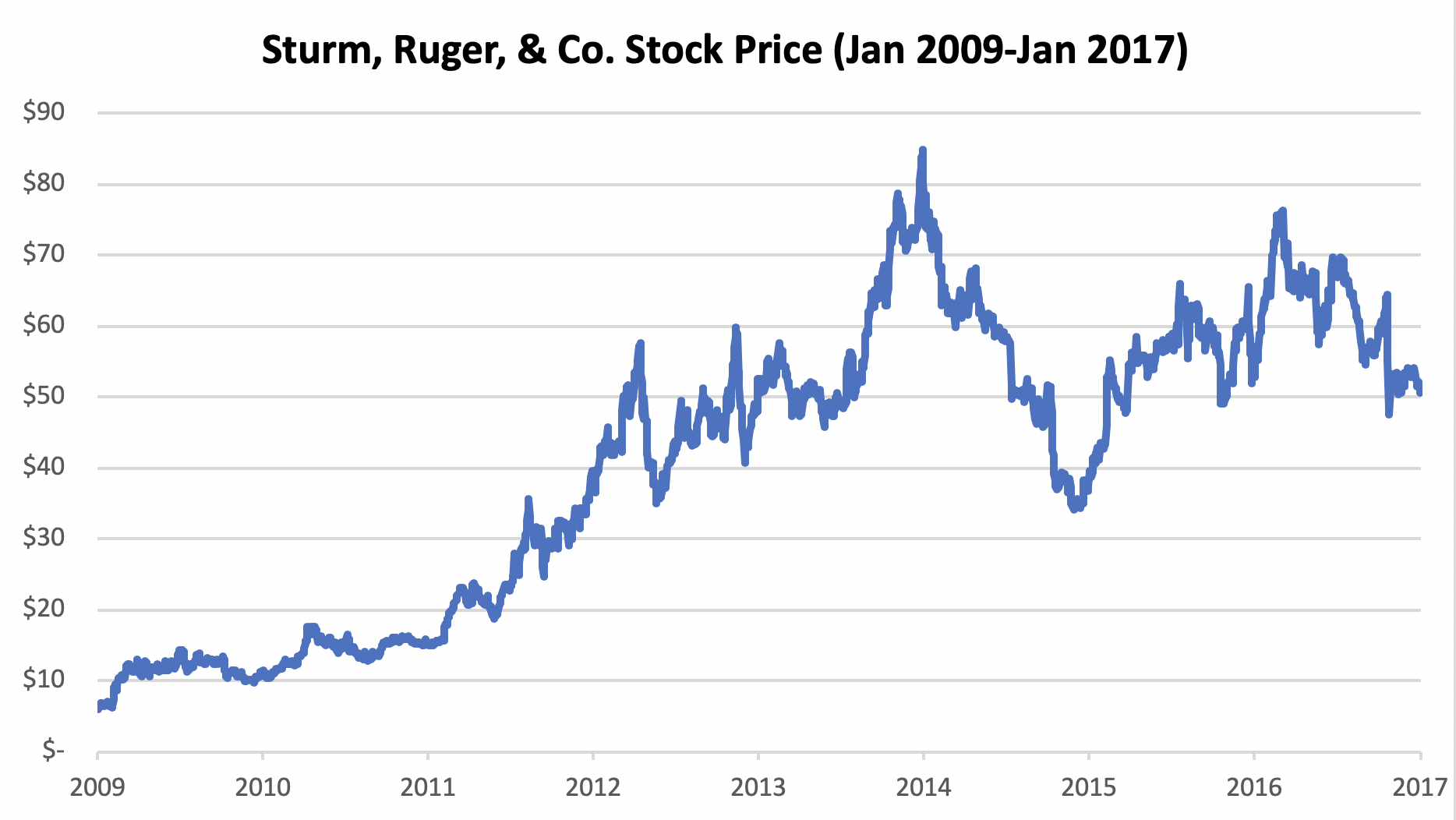 Timing and luck are both critical factors

It’s not who the president is but a variety of other factors that generally have a bigger impact on markets during the term of their presidency.  Interest rates, demographic trends, length of current contraction/expansion in the economy, and market valuations all play critical roles in determining success; many of those factors are determined in advance of them taking office and little is done to change them in the short term.  The bottom line is that the President has very little control over how markets act during his term and even less control over what type of market environment he inherits.

We have become a tribal people and we are more divided than ever.  We are somehow led to believe that if the other side wins, chaos will ensue.  The fact is that capitalism has prevailed through some pretty dark days and my bet is it continues to chug along regardless of who is sitting in the Oval Office come January 2021.

Do I think that there are certain candidates that are more “market friendly” than others?  Yes.  Do I think that it actually matters much?  Not really.  There is a lag effect to these large scale policy changes and history is a better judge of them than day to day market movements.

Stick to your plan, tune out the noise, and stay focused on better days ahead.

Get to know us